These days there are no shortage of App Stores. iTunes, Android, Blackberry, Palm, OneForty, Boxee and there are many more still and many more coming.

My favorite app store model is the open one like Android and Boxee. You can install an app from their app store or from the open web.

The key requirement for a successful app store is a vibrant developer community.

The best thing about Facebook’s platform for third party apps is that they are great for users and developers can make a real business from the platform. Good for users + economics for developers is great for Facebook.

I was in a cab with Fred and Andrew last week. We were talking about how some apps can generate huge velocity on Facebook. Fred mentioned the three things on Facebook, newsfeed, requests and inbox tied with the social graph, are the keys to that distribution network.

That is absolutely correct and other App Stores can learn a lot from this.

Imagine if you checked into iTunes and saw a your friends or folks you follow in a newsfeed or timeline:

And with a single click you could install or buy that app.

It’s a simple example but those viral functions don’t really exist on any other app store that I’ve seen. But I suspect they will shortly.

Ask Me – The Decemberists

My song this cover Friday is brought to you by @colinmeloy. Original by the Smiths.

I’ve been using the new Twitter List functionality over the past month and I’m already addicted. I’ve created a few lists for my benefit including some super close friends which I made private and a bunch of other lists that are public. It’s a simple way to filter my stream.

I guess it’s my very own Suggested User List.

The Droid’s biggest flaw, however, is in its hardware design: The keyboard is shallow and flat, which can make typing uncomfortable.

I’m still going to give the Droid a test run but I was hoping the keyboard was going to rock.

The Fake Headlines – The New Pornographers

Such a fun band. 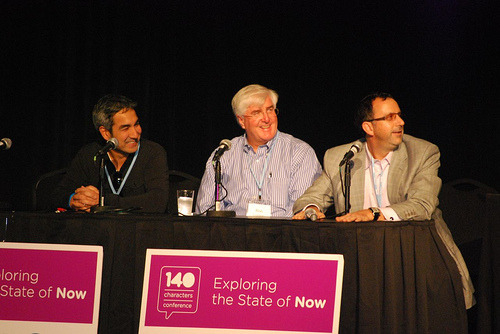 I ran into a bunch of friends and familiar faces. It was also plenty of fun meeting a number of new entrepreneurs.

Frankly, I didn’t know what to expect from the conference. But I have to say, I was really impressed. Jeff Pulver has organized a fantastic event and I’m really glad I was able to participate and attend many of the sessions yesterday.

The coolest thing about the sessions was the range of topics and ideas about the real time web, Twitter and where media is going.

To give you an idea of the diversity of topics, the speakers covered everything from venture capital, television, news, music , law enforcement, public diplomacy and mom communities. And that was just Day 1. Day 2 is today.

But the most powerful session yesterday was led by Mark Hovarth. Mark talked about his experience being homeless and his tireless work as an advocate for the homeless. He shared intimate photos and stories about specific individuals that were beyond moving. He uses his blog & Twitter to tell the world what is going on. 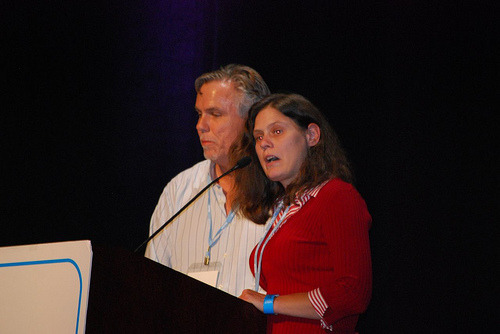 Mark brought a woman on stage that he met in Chicago that is homeless. She uses Twitter at public libraries and SMS (publish only) to share her experiences about her life (I missed her twitter username so I’ll have to ask Jeff to send it to me). A number of us in the audience gave Mark a standing ovation after his session. And for good reason.

Thanks Jeff for putting on such a great event. Thanks for inviting me. And thanks for your passion.

Update: I just got a tweet from Mark. The woman’s name is Ann and she tweets at @padschicago.

(found these 140conf pix on flickr from george dearing)

Took the red eye flight from LAX to Boston this morning. I’m taking way too many of these flights so I decided to make this my red eye theme song from now on :)

The very first time I used a DVR I was hooked. The DVR was more than just a glorified VCR. It was something completely new and refreshing. Beyond season events or one click recording, I could actually pause live tv. Or I could go back 30 seconds. Or I could record a show and then start watching the show 25 minutes later so I could catch up in real time by skipping all of the ads.

The DVR also came at the same time broadband was being deployed. As users we expected to have an always on connection to the web and everything on the web was unicast and on-demand by design. There was no such thing as an appointment web or Must See TV online. And the DVR brought that on-demand, time shifted experience to our big screen.

But it’s interesting to think that as television copied some of the web’s best behaviors, the web went real time. For some television shows, time shifting is far less interesting because we are now plugged into real time information networks like Twitter & Facebook. For example, I used to DVR football games but that’s harder to do nowadays.

The web now also has many more real time activies beyond Twitter & Facebook. Online games aren’t merely turn based but they are social and real time. CNN and others stream live online. MLB streams live. The other other day YouTube streamed the U2 concert live. The Presidential inauguration was steamed live. The list goes on and on.

But the real time web vs the real time broadcast television model in reality couldn’t be any different. The real time web is a two way network. It’s social. It’s a la carte. It’s comes with a permalink. It can be indexed, saved, copied, and blogged. It can be retweeted. It has super distribution built into it’s guts.

Sukie In The Graveyard – Belle and Sebastian

A fun song by a great band. Perfect for your Halloween playlist.